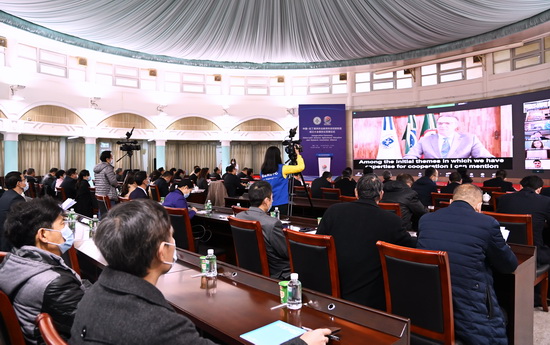 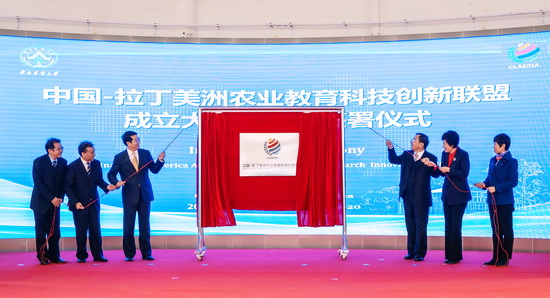 On December 18th, proposed by SCAU,the China-Latin America Agricultural Education and Research Innovation Alliance(CLAERIA)jointly built by 46 universities from China and 13 countries in Latin America was officially established. At the ceremony, 15 MOUs between SCAU and other universities were signed. CLAERIA is committed to boost the cooperation among members from China and Latin American in talent cultivation, scientific research,cooperation in running schools, technical promotion, skill training, people-to-people exchanges, etc.The Alliance shall promote mutual benefits and seek common development in agricultural education and research in China and Latin America through the establishment of cooperation platforms, enhancement of cooperation mechanisms and boost of resources sharing.

Mr. Francisco Durán, Vice Minister in Ministry of the Popular Power for Science and Technology of Venezuela, Mr. Lan Hu, Ambassador of the People's Republic of China to the Republic of Colombia, Mr. Carlos Giralt, Consul General of Mexico in Guangzhou,Mr. Luis Fernando Gaviria Trujillo, Rector of Universidad Tecnológica de Pereira, Colombiacongratulated on the founding of the Alliance in their speeches. Congratulatory videos from Chinese Embassies in Latin America, Consulates General in Guangzhou as well as over 20 Latin American universities were also received and played at the Ceremony. 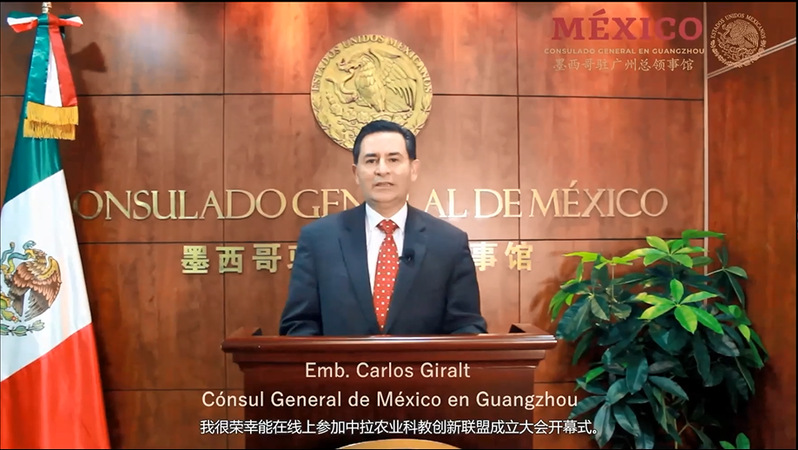 Professor Liu Yahong, President of SCAU delivered the welcoming speech in which she noted that as the sponsor of this Alliance and the host of this Ceremony, South China Agricultural University will shoulder the responsibilities entrusted by the Alliance, share our experience of technological innovation in crop breeding, agricultural resource protection and utilization, pest disease control, new energy technology, intelligence agriculture to contribute to modern agricultural development in China and Latin America. 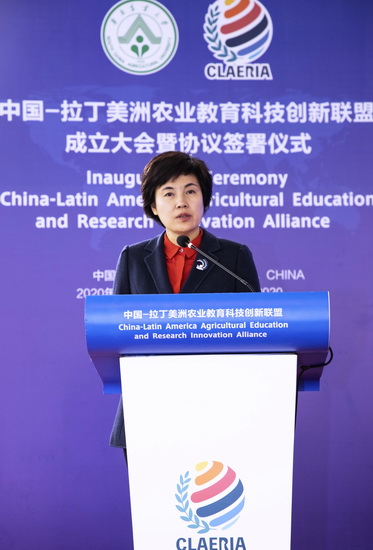 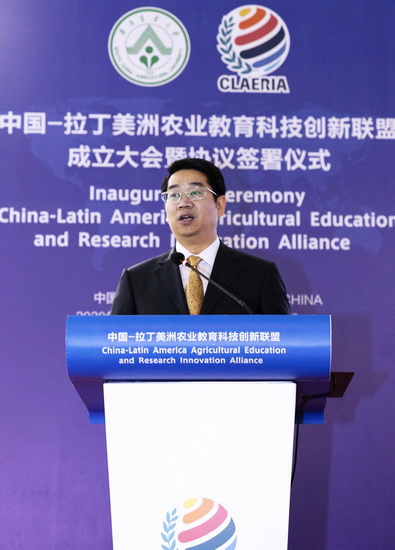 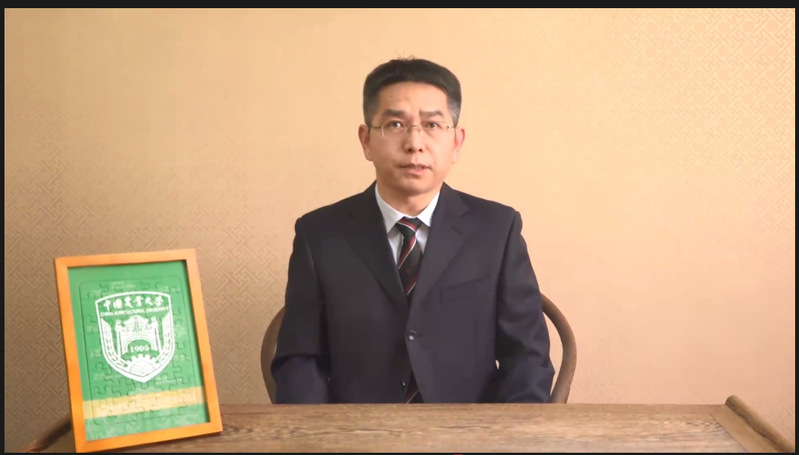 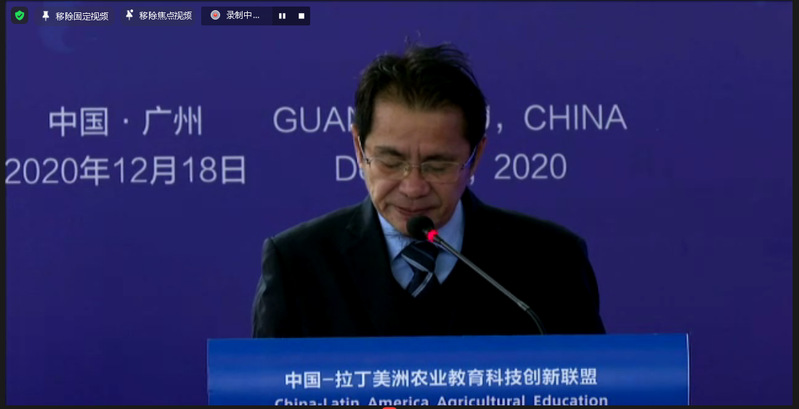 Mr. Wei Zhenglin, Deputy Director General, Department of International Cooperation, Ministry of Agriculture and Rural Affairs of PRC emphasized that the COVID-19 pandemic has brought profound changes to international relations, and global agricultural development is facing new challenges and opportunities. Innovation in agricultural education and research will play a vital role in meeting challenges and promoting economic recovery and revitalization of agriculture and rural areas in the post-epidemic era. At this time, the establishment of the China-Latin America Agricultural Education and Research Innovation Alliance is justified and promising. It is an innovation itself and of great significance to deepening China-Latin America comprehensive cooperative partnership of equality, mutual benefit and joint development and building a China-Latin America community in the future. 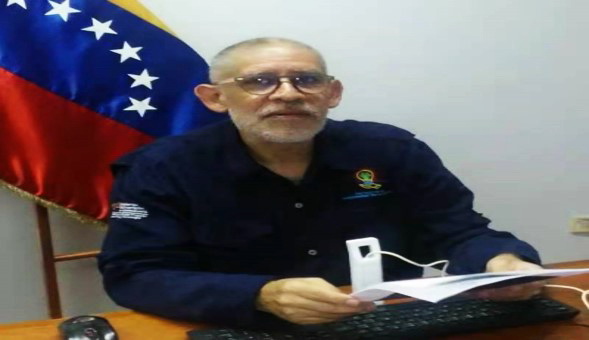 Mr. Francisco Durán, Vice Minister of Ministry of the Popular Power for Science and Technology of Venezuela hoped to work with South China Agricultural University and deepen the Sino-Venezuela friendship.

Mr. Lan Hu believed that the Alliance will bring up substantial, mutual beneficial cooperation and well-beings to peoples of both sides.

Mr. Carlos Giralt wished that the Alliance could play an active role in boosting the communication between China and Mexico and the development of sustainable agricultural in order to address the global issues of food shortage. 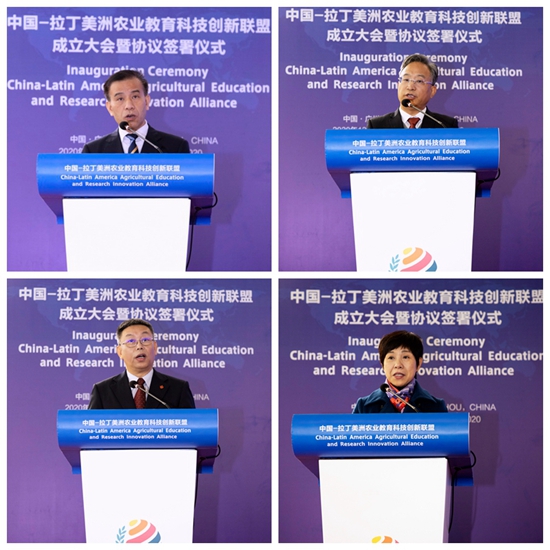 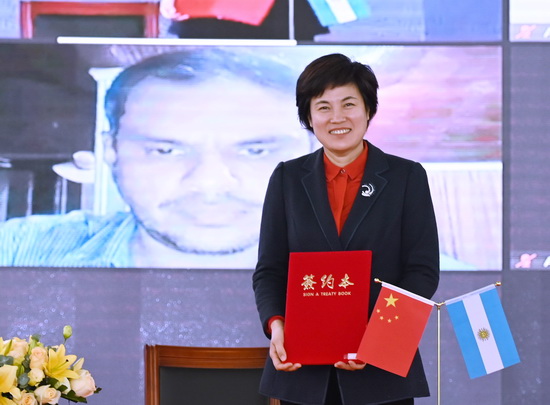 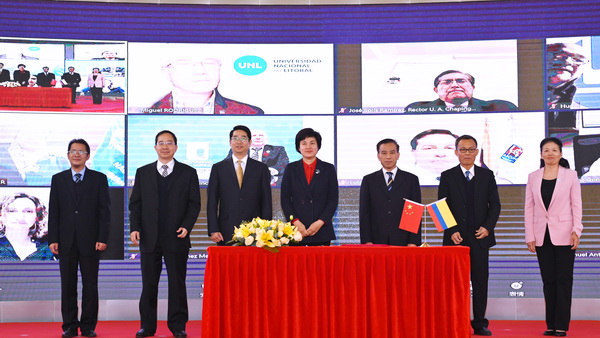 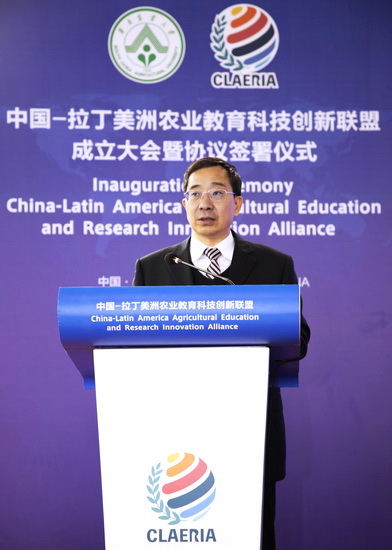 Dr.Wang Binwei, Secretary General of CPC SCAU Committeepointed out in the closing remarks that SCAU will build the working mechanism and network for the Alliance soon. Following the principle of opening up and cooperation, SCAU will work to meet the demands of rural and agricultural development. The Alliance will center on areas like breeding of new varieties, intelligent agriculture, green agriculture, animal and plant disease prevention and control, agricultural machinery and equipment, agricultural product processing, environmental protection and restoration of agricultural resources and seek major breakthroughs. We shall also speed up application and commercialization of research outcomes to promote the rural and agricultural development in China and Latin America.